Remote work is here to stay! Here's how to do it well.

At this point, schools and some workers will be able to go back into the office from the beginning of June. It’s been a unique experience going from office-based one day to remote working the next.

But how many organisations will make the return to office-based work mandatory and how many will stay with remote and blended arrangements? Early indications suggest that the latter case will be more common.

Remote operating models are not new though. There are several successful organisations that have been remote. Some for over 20 years. Organisations such as Automattic, BaseCamp, Modern Tribe, CleverTech and Zapier, have very successful globally distributed workforces.

Some evolved, while some have been remote from the start. But they all see remote working as the optimal operating model.

It seems that the enforced lockdown has also changed the way we think about work. Notwithstanding the caution around returning to large offices full of people after months of isolation, it seems that we’ve actually got used to it. And like it.

The data from a poll we ran on LinkedIn suggests that few of us want things to go back to how they were. Admittedly, it’s a relatively small sample size but it’s not unreasonable to suppose that these views aren’t uncommon. 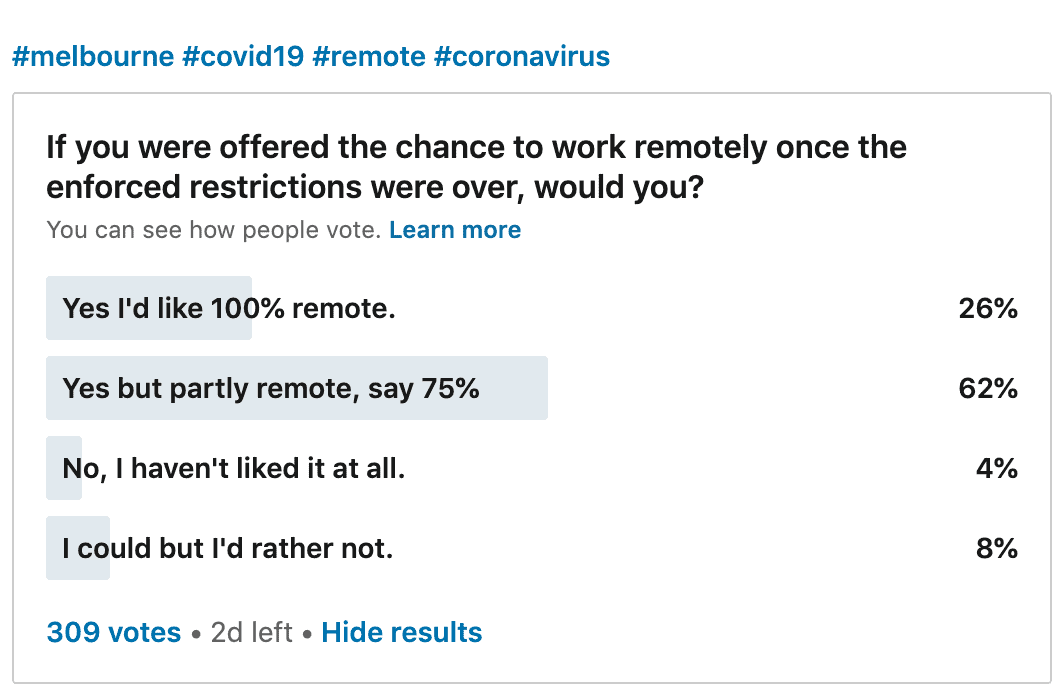 There are several identified benefits to both employer and employee in remote working. Research has shown that remote workers are:

Geographically bound workforces have been an inhibitor to growth for years. It stands to reason that there can only be a certain volume of talent available in one location and when a large number of organisations are all competing for that talent, the cost and complexity of acquiring it is affected.

So the benefits seem obvious, which is why this approach to working is growing in popularity. In the 12 years before the COVID19 pandemic, remote working had seen 159% growth and it’s projected that 73% of all teams are expected to have remote workers by 2028.

So the question now is not why should organisations embrace remote working but how?

How have others done it successfully?

As with all new practices, it is not simply a matter of replicating old ways of doing things in a remote environment. Jason Fried Co-Founder of BaseCamp describes the challenges of moving from a traditional office model to a remote model. He literally wrote the book on Remote working back in 2013 (REMOTE: Office Not Required, Jason Fried and David Heinemeier Hansson).

“Where people go wrong is when they try to simulate working in an office, but just remotely: the same number of meetings, the same number of people in meetings, just via videoconferencing. That’s not taking advantage of the potential benefit of remote work: asynchronous work, meaning that you don’t have to do everything in real-time anymore. You can give people more time back during the day-long stretches of uninterrupted time where they can do more creative work.”

One of the most interesting observations that Jason makes is that organisations are already leveraging remote workers through utilising external vendors.

The core unit for all organisations that have adopted remote learning is the Team. Team definition varies by organisation and work task, but the underlying principle is that the team is working to achieve a common goal. Traditional operating models of having regular and set meetings for team members can detract from the effectiveness of remote teams.

This requires a new management paradigm of empowerment and trust.

This doesn’t mean that there aren’t meetings and catch-ups between team members. It means that we do them through different channels. So paradoxically, while remote teams may have less formal work practices, agreed frameworks and principles are essential for remote teams to be effective.

For Shane Pearlman the CEO of Modern Tribe, a business that has been fully remote since its inception in 2000 there are some key principles that he sees as essential to the success of remote teams.

Trust – be predictable and consistent in your behaviour so that people know what to expect. Good patterns of behaviour lead to independent staff and freeing people up to act thoughtfully.

Define what success looks like and get agreement within teams. Decision-making cycles in remote operations can be longer, so everyone needs to be clear on what success is.

All projects and deliverables need to have an owner who is accountable and can remove blockers for team members. The owner does not have to be a worker, but they need to have the authority/ ability to engage with the team to remove roadblocks and deal with issues. There does need to be some sort of structured process for managing projects or workflows

Manage backlogs – are some people underutilized while others overworked? Are people blocked or stuck and do they need a meeting to resolve issues. Scrum is an effective way of managing this challenge

Ensure that there is an overlap in all teams’ schedules so the team members can have synchronous interactions if required. (At Tribal Mind all staff within a team have a 3-hour overlap in their schedules).

Document the protocols the team agrees to, including comms channels, what is agreed to be synchronous and asynchronous communication, what are the primary meetings, and what should happen if there is an emergency.

Flex time – recognise that staff may be working on different schedules so try to respect these as much as possible.

Understand that people have different working styles so that some people will want a structured time to address issues & questions while others are happy to manage them as they come.

Have an agreed protocol for managing data and assets with strong source control.

In an asynchronous environment, communal comms channels such as Slack work better as there is a record of discussions and actions that can be reviewed. Try to avoiding Direct Messaging and emails as synchronous communications tools

Highlight and/ or record incidents that interrupt agreed rhythms so that you can review the efficacy of processes and make changes as required.

Recognise that when working remotely you will not have the same range of cues to determine if someone is going off the rails. Try to be artfully intrusive so you build rapport with the person and you can tell when things aren’t going well. Issues of recognising burnout and also providing praise and rewards for work well done in a remote environment need dedicated focus.

Automattic founder Matt Mullenweg has seen similar challenges as his business has grown to 700 staff across 62 countries. The operating environment has determined that the type of employees he looks for are:

Automattic has codified its operating practices into the Automattic Creed which ensures cultural alignment through a shared vision. This helps to align employee’s focus and activities. The creed is:

Automattic recognises that transitioning from a traditional office-based environment into a remote working environment can be a challenge. So they have developed their recruitment process to reflect the reality of working in a remote workplace.

One way that they have done this is by conducting the interview process via Slack. They leverage interviewers from around their global network and utilise both synchronous and asynchronous communication styles. They then complement this process through a paid trial where candidates can exhibit their capability working in a remote environment. This approach while rigorous has delivered a less than 5% attrition rate in engineering roles.

New hires get supported in their induction with a dedicated mentor who is in the same time zone. They also have the cost of setting up their home office reimbursed and a monthly allowance to cover costs. This includes the ability to pay for access to a co-located office environment. The business has developed a shared field guide to detail their operational processes and staff are empowered to modify these guides if they identify a better way of doing things.

As with Shane at Modern Tribe, Matt Mullenweg highlights that breaking down hierarchy and bureaucracy to the team level is essential to operating a remote working environment.

Communication is also crucial, he says, and he advises that the communications platforms, both synchronous and asynchronous, are used diligently so that everyone is aware of actions and decisions.

What does it all mean then?

So it’s clear that remote working is a practice that will only increase over the next few years. The organisations that have already had success with it have shown us how to make it work.

Your three key takeaways are:

The next wave of business competition will be won by those who can rapidly implement effective remote practices and in doing so, deliver the products and services that meet the demands of the market.

It won’t be easy but the rewards will be worth it.

Researched and written by Scott Comte.

Photo by Aziz Acharki on Unsplash

Our thanks to Shane Pearlman and Toby Nieboer for their assistance with this article.

I just wanted to say, thanks for the emails; It’s raw, honest, actually helpful, and some of the only marketing I actually read each week. 🙂 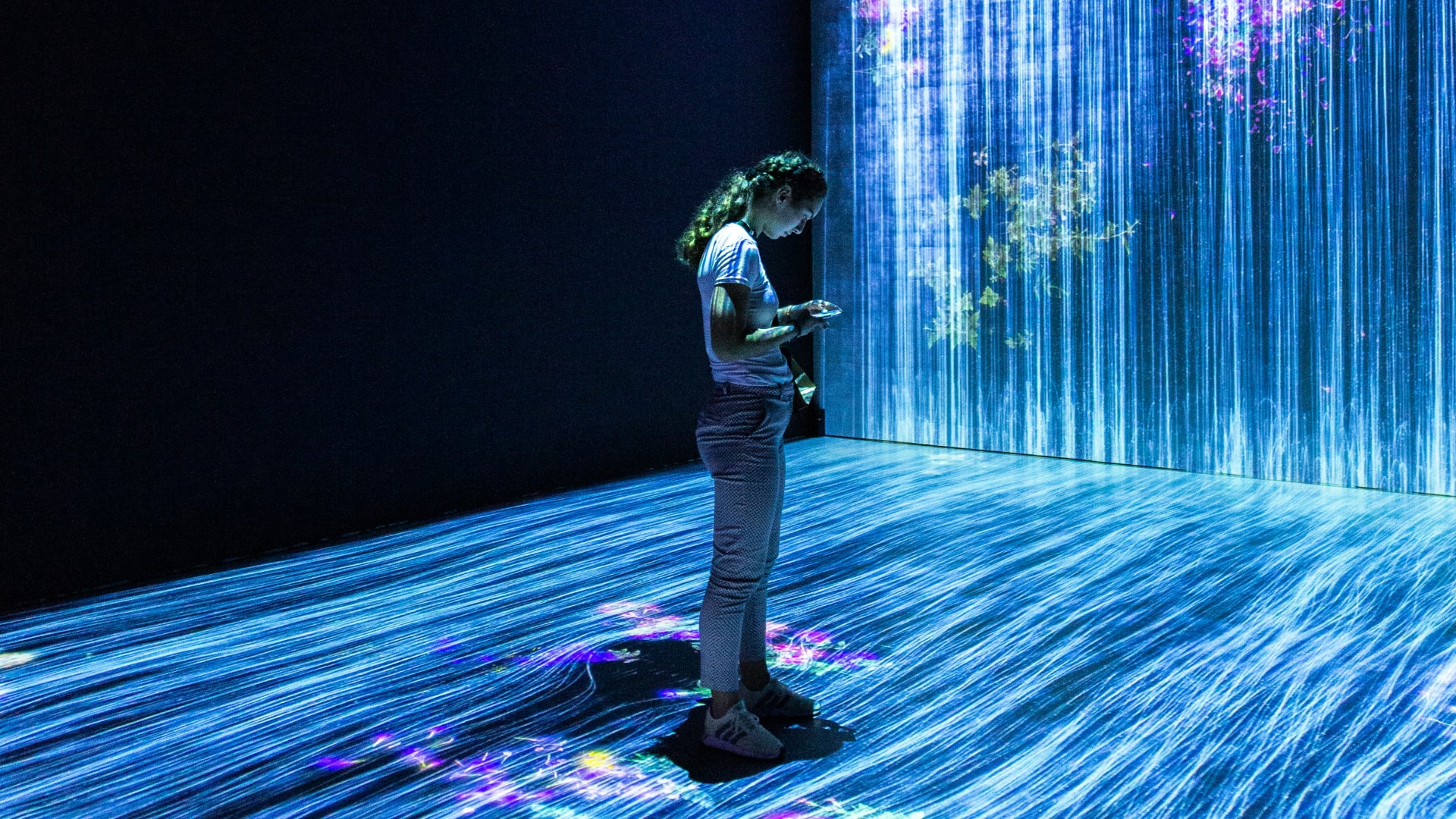 2020 was the year that taught Melbournians a thing or two about resilience and managing unexpected situations. But what does 2021 hold? 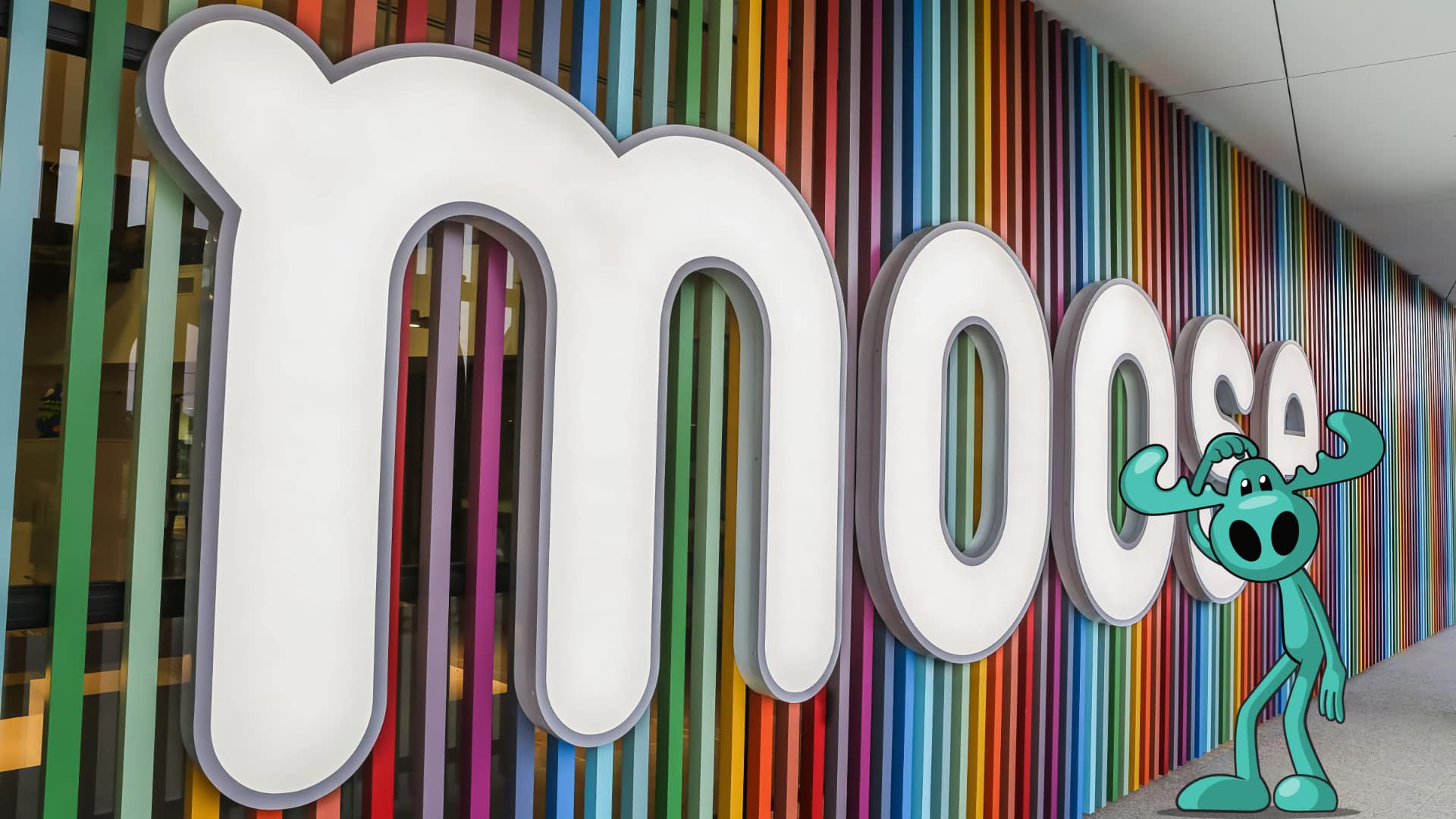 Ask most HR people about “talent strategy”, and generally you’ll get a slight glazing over of the eyes and some throwaway comments about candidate experience 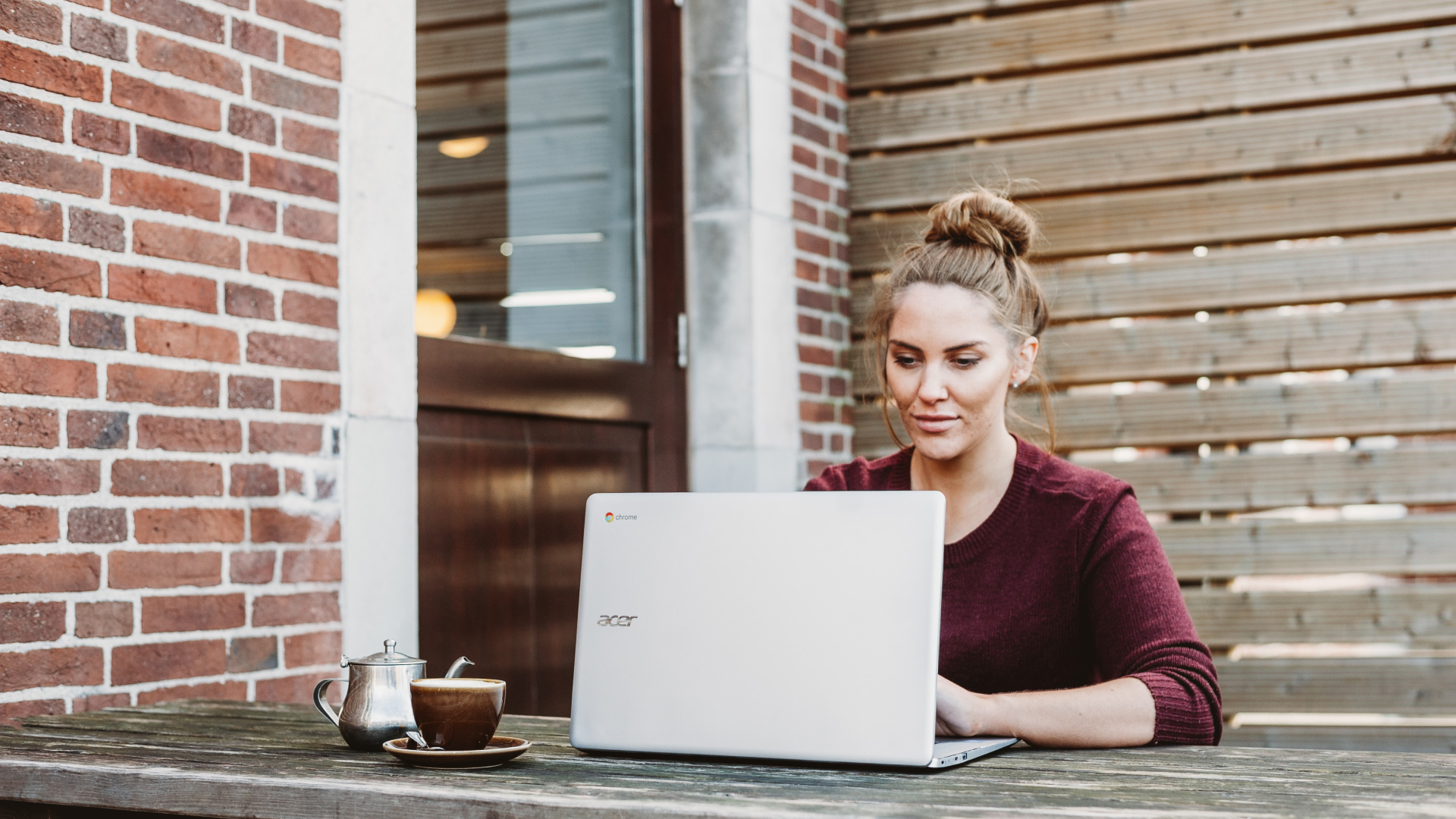 You might be at a point in your life where you’re asking yourself if you like what you’re doing or if you want to do something else. You may have also lost your job, and now you need to find a new one.

Regardless of where you are on your journey, we can help.